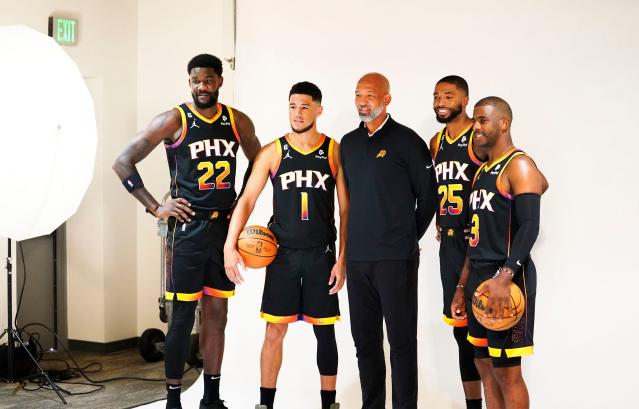 Time to “Rally the Valley” Suns Fans! The 2022 NBA Season have arrived! Devon Booker, Chris Paul and the high flying Phoenix Suns finished with the best record last year and hopes are high. Home opener is on Wednesday, October 19th at 7:00pm against the Dallas Mavericks at the Footprint Center, so if you are in need of executive transportation with exceptional service, look no further than iRide Worldwide!

The Phoenix Suns are an American professional basketball team based in Phoenix, Arizona. They compete in the National Basketball Association (NBA), as a member of the league’s Western Conference Pacific Division. The Suns are the only team in their division not to be based in California, and play their home games at the Footprint Center. The Suns are one of four major league sports teams based in the Phoenix area, but are the only one to bill themselves as representing the city (the other teams – the Cardinals, Coyotes, and Diamondbacks – all bill themselves as representing the state of Arizona).

The franchise began play in 1968 as an expansion team, and their early years were shrouded in mediocrity, but their fortunes changed in the 1970s after partnering Dick Van Arsdale and Alvan Adams with Paul Westphal; the team reached the 1976 NBA Finals, in what is considered to be one of the biggest upsets in NBA history. However, after failing to capture a championship, the Suns would rebuild around Walter Davis for a majority of the 1980s, until the acquisition of Kevin Johnson in 1988.

In 2004, the Suns signed free agent Steve Nash (who had blossomed for the Dallas Mavericks after being traded from Phoenix six years earlier), and returned into playoff contention. With Nash, Shawn Marion, and Amar’e Stoudemire, and under head coach Mike D’Antoni, the Suns became renowned worldwide for their quick, dynamic offense, which led them to tie a franchise record in wins in the 2004–05 season. Two more top two Conference placements followed, but the Suns again failed to attain an NBA championship, and were forced into another rebuild. After ten consecutive seasons without a playoff berth, the Suns reached the 2021 NBA Finals after acquiring Chris Paul, forming a quartet with their young core of Devin Booker, Deandre Ayton, Mikal Bridges and Cameron Johnson .